WALKING ON THE MOON IN LANZAROTE 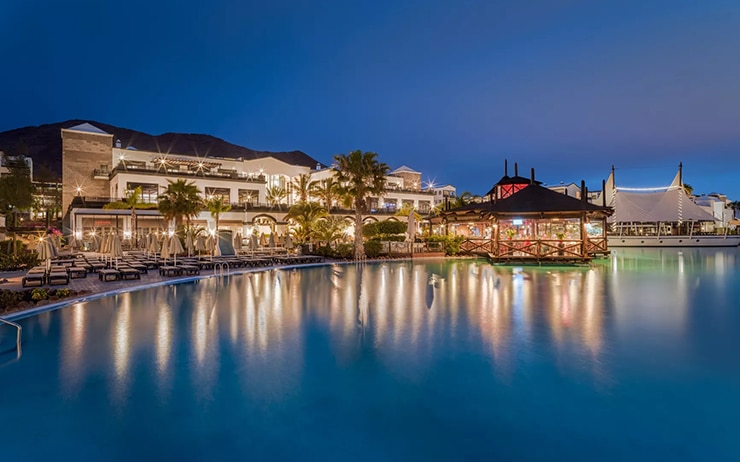 Lanzarote sits west of Morocco and is part of a Spanish archipelago interestingly titled The Canary Islands. Craggy and desolate from the volcanoes that formed it, there are pockets of civilization and quite a few resorts dotting the landscape.

If humanity were to somehow terraform and colonize Mars, I have to imagine the end result would look something like this. I was taken aback by how the island landforms reminded me of something out of a sci-fi movie. I wouldn’t even try to hike over it because if you tripped, you’d likely be seriously injured.

From a vehicle, however, its the kind of monotonous scenery that will put you to sleep, and that we did…several times during our tour of the island.

We stayed at the all-inclusive H10 Rubicón Palace resort in the Playa Blanca region of the island. I enjoy luxury accommodations when I travel, and we were fortunate enough to enjoy this highly-recommended 5-star dwelling. Numerous pools, unlimited alcohol, and all-you-can eat food took much of the thought out of daily life. We spent most of our time on the island here only venturing out once to tour the island.

The only downside to staying there was that it was not adults only, so as you can imagine children were everywhere.

That in and of itself isn’t a bad thing, but when they inevitably run into you or trip you, and make a mess of the shared food space; it becomes an issue.

The highlight of this leg of the trip was the tour of the island. As I’ve noted, there isn’t a ton of captivating scenery and little to no vegetation on large swaths of the island, but the coasts are a different story. From black sand beaches to large waves violently crashing against the worn volcanic rock and the green lagoon, or El Golfo, the coasts boast some of nature’s finest artwork.

That isn’t to say that the mountainous regions are without beauty. They boast mild volcanic activity, which we’ll get to. The elemental contrast between the regions fascinated me.

WE FOUND SOME WINE

At one point on our tour the bus (van?) stopped at what amounted to a truck stop. It turned out to be a needed oasis. There was a wine store and a buffet with decent food. We bought a couple bottles during the downtime.

The official theme for this segment of the tour is heat as we witnessed food preparation over a volcanic vent, a “geyser” show, and a literal pit of fire. Yes, in the mountains of this alien wilderness (aka Las Montañas del Fuego) there is a restaurant, El Diablo Restaurante, that uses geothermal heat to cook food.

Given the amount of tourists who walk through to view natural grill, I’m not certain of how sanitary it is — I suppose they count on the heat to kill germs.

After our tour of the restaurant, we witnessed a “geyser”, which in all honesty is a someone pouring water down a hole that spits it back up by the heat and pressure of the semi-active volcano.

Then, to further demonstrate that we were actually actually standing on the precipice of hell, we witnessed the burning of grass in one of the heat vents.

Jameos del Agua is a tourist attraction and restaurant on the Northern part of the island. A tube-shaped natural formation created by a cooled lava, it contains a gorgeous azure crab lagoon. Personally speaking, I think the restaurant surrounding the lagoon takes away from the beauty of it, but it was still a worthwhile stop during a day-long excursion.

Lanzarote was a brief resort stop on our Spain trip for a bit of sun and heat during the typically chilly early fall. It is a place for relaxation more than action and I was grateful for it. If I ever find myself in the Canary Islands again I would opt for an adults only resort instead and maybe on another island like Tenerife for variety. Still, it was a great experience and recommended if you’re looking to kick back.