For my birthday, I was taken to Maison Harlem; a rustic French restaurant on the corner of west 127th street and St. Nicholas avenue.

The ambiance inside of the restaurant gives a very classy, yet casual vibe. Scaffolding outside of the establishment takes something away from what is otherwise a very nice culinary experience, but that is the fault of the city and not the restaurant. You can see what the restaurant normally looks like if you do a simple Google search. The decor was eclectic and gave the restaurant character with menus that were made from old record jackets, a (porcelain ?) chicken painted in the style of the French flag, and various artwork that would likely please any Francophile. Patrons seemed to be a nice mix of local Harlem residents and recently settled hipsters, which is nice to see, but also serves as a reminder of the huge changes taking place in that section of the city.

The food served was similar to what you might find in an actual French restaurant, including the requisite escargot dish. My appetizer was the Crabmeat & Shrimp Cake, which was tasty with the provided fresh dill tartar sauce. For my main dish, I had the Seafood Croustillant, which was composed of shrimp, mussels and scallops drenched in cream sauce inside a thin crispy pastry shell on a bed of cooked spinach. The cream sauce was very delicious, and had our waiter not taken our bread away, I likely would have cleaned the plate.

The service was very speedy, and the waiter very attentive. It’s always terrific when I don’t have to monitor my water intake because I know my glass will be filled without asking.

I had a Crémant (French sparkling wine) with my meal.  For those of you who don’t know, it’s essentially the French version of Prosecco. I’m kicking myself because the brand escapes me and I neglected to take a photo of the wine list for reference. It was tasty and light with pear notes; I badly wanted to mix it with orange juice to make a mimosa, but it would not have complimented the meal.

If you like French cuisine with a relaxed atmosphere and great service, Maison Harlem is a prime choice. 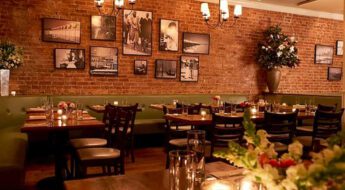